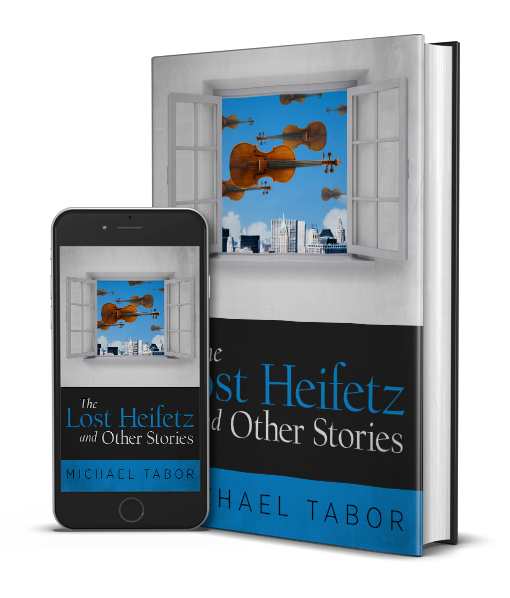 My study is suffused with the autumnal glow of late afternoon sunlight. It would almost be a crime to turn on my desk lamp and disturb the golden tranquility of the moment. I sit back and listen to my daughter practicing the violin in the next room. She has just started to learn the Bach sonatas and partitas, and although it is early days in her lifelong musical journey to the mountaintop, I can hear — or maybe it is just a father’s pride that hears — a certain warmth in her tone that tells me the music is already starting to speak to her. When I hear her play Bach on his violin I often wonder what he would think if he could hear her. When I gave her the violin for her last birthday I simply said it belonged to a man I once knew who gave it to me and who would have wanted me to pass it on to her. It will soon be time to tell her the whole amazing story.

It all began on a Sunday afternoon in October, about twenty years ago, when I had dropped by the old HMV store on Broadway and 72nd Street to look for a recording of Bach’s Well Tempered Clavier by Andras Schiff. I had the Glenn Gould recordings, but after hearing some of the Schiff at a friend’s home, I was very interested in buying the Schiff for myself. After a few minutes of idly flipping through the racks of CDs I went to the desk at the back of the store where they kept a selection of music guides and reviews. I picked up the Penguin Guide to Classical Music and flipped it open to the section on Bach. At that point an irritatingly campy voice loomed over my shoulder.

“Can I help you find anything?” I turned to find a smug looking sales assistant with curly ginger hair and a loudly colored sweater.

“Well, you certainly won’t find anything in that,” he said pointing at the book in my hands. “Those guys are just a bunch of English armchair music critics. They’re not practicing musicians. They don’t know anything.” He suddenly plucked the book out of my hands. “I see you’re looking at the Bach section.”

The guy was really starting to annoy me but I remained polite. “Yes, I was looking at their discussion of recordings of the Well Tempered Clavier.”

“Well, that just proves my point. See, there’s no mention of those divine…” and he said “divine” with a little shudder, “Glenn Gould recordings. Obviously those self-proclaimed experts just don’t know how Bach should be…”

At that point it happened: out of the corner of my eye I noticed an elderly man, just a couple of feet away, wearing an old beige raincoat and a battered brown hat, listening in on our brief exchange. He suddenly spoke up in a thick European accent.

“So tell me: who knows how it really should be?”

He came right up to us. He took off his hat revealing a head of thick white hair. He had a very lined but clearly once handsome face and twinkling gray eyes. The sales assistant stared at him angrily, obviously irritated that his profound commentary on the contemporary music scene had been interrupted. The old man spoke again.

“So tell me: who knows how Bach should be?” His eyes seemed to fix on me like some ancient mariner. “Let me tell you. Years ago, before the war, I was in Vienna at a recital of Bach by Szigeti, and I was there with my good friend Max Aldinger…”

This was amazing. “You knew Max Aldinger?” I burst out.

He ignored my question and continued. “At the end of the recital the audience stood up and applauded, and the lady sitting next to us turned to Max and said, ‘Very nice, but it is not Bach.’ And my friend Max—and I remember his exact words—turned to that foolish lady and said, ‘But excuse me, Madame, did Bach himself tell you how it should be?’”

The old man was very animated and repeated the story. “That lady, as she clapped her hands…” and here he imitated a little hand clap, “she turned to Max and said, ‘Very nice, but it is not Bach’ and Max said, ‘But excuse me, Madame, did Bach himself tell you how it should be?’”

The assistant shrugged his shoulders and minced off to another part of store in search of easier prey, leaving me with this amazing old man. I was bursting to ask him a million questions.

“When exactly was this? How did you know Max Aldinger? Were you a professional musician in Vienna before the war?”

He gave a sad little smile and seemed on the verge of answering my questions when the opening bars of the slow movement of Bach’s double violin concerto started playing over the store’s sound system. His face seemed transformed—as though the music had wiped away the lines of old age—and a small, almost seraphic, smile started to form on his lips. But only for a split second: at that instant, the store door was pushed open by a departing customer just as a police car with blaring sirens roared past on 72nd street. The harsh sound penetrated the store like a blast of ill-tempered wind accompanied by a momentary flash of red and blue lightning. To me this was no more than mildly irritating: a typical occurrence in a New York day that a New Yorker scarcely notices. But to my mysterious stranger it was clearly much more. The look of other-world serenity that had just started to spread across his face instantly changed into one of fear. His jaw clenched and his body stiffened. He quickly put his hat back on and tightened the belt of his raincoat.

“Excuse me, sir, for interrupting you. I wish you good health and good luck with your search for Bach,” and he walked briskly out of the store.

The whole encounter, for all its brevity, was incredible: Bach, Szigeti, Aldinger. I had to know more. I ran to the exit to catch him, but by the time I had got outside onto the street he had disappeared.

Only in New York, I thought to myself as I made my way home. The old guy was most likely a member of that community of elderly European Jews who populated the Upper West Side. Maybe he had been a musician in pre-war Vienna. But Max Aldinger? How could he have known him? The great violinist, teacher, and humanitarian had held court in Vienna until the Nazis kicked him out for helping Jewish musicians escape. Maybe he was one of them. But what really stuck in my memory of our encounter were those final moments when the Bach concerto started playing, only to be interrupted by the braying of the police siren; a hideous counterpoint to the lyricism of the violins. Although it was only for an instant, that initial look of serenity on his face somehow suggested—and I couldn’t really have said why at the time—a deep and special intimacy with the music. By contrast, his fearful reaction to the sudden blast of the police siren was far more than the shudder of anxiety often displayed by the elderly when startled by an unexpected noise or intrusion, and I wondered if the siren had stirred up some dark memory.

Whoever he was, and whatever his story, the incident would make for a wonderful anecdote, and I looked forward to telling it to my old friend Peter, a violinist with the Metropolitan Opera orchestra. Peter had briefly studied under Aldinger and might even know who the old guy was. Over the next few days I practiced his accent. I just loved the line, “But excuse me, Madame, did Bach himself tell you how it should be?” In fact, it all rather haunted me: in those few lines he had really got to the essence of musicianship. As a talented teenage violinist I had set my heart on a career as a soloist and, in those fantasies permitted in adolescence, dreamt that I would become a pupil and protégé of the legendary Max Aldinger. However, my teacher, a former assistant concert master under Ormandy, finally had to put me straight: “Colin, you are indeed a very talented young man. If you wish, you could become a very good violinist. But I have to tell you now, before it is too late, you will never be a great violinist. It is difficult to explain: you play with great precision, and you can play with some feeling, but the music itself never truly speaks to your heart. Without that, you will never be able to communicate the deepest meaning of the music to your audience.” It was, at the time, a shattering blow. But he was right. I eventually overcame my disappointment, decided to make music my hobby, and embarked on a career as an independent software developer. Over time, I was able to persuade myself that I had the best of both worlds: a rather successful business and the ability and opportunity to play chamber music for fun with professional musicians like Peter. To him and his friends I was the “exceptional amateur” and, over the years, that made up for not being the “unexceptional professional.”

Music was Peter’s life: when not playing professionally, he was either teaching or playing for fun with his friends. I had first got to know him when he married a distant cousin of mine, and although he was quite a bit older than me, we stayed firm friends even after they divorced. We usually met up in a small group every few weeks to play. At our next meeting it was just the two of us, and I told him my story. I expected him just to have a good laugh. To my surprise, he became uncharacteristically serious.
“This is absolutely the most incredible thing. Can you remember if he put an exact year on when that happened? Was it 1937? This is amazing, absolutely amazing.”

“Come on, Peter, it was just an old geezer reminiscing, maybe even fantasizing. It’s certainly rather unusual, but why is it so absolutely amazing? What’s the big deal?”

Peter explained. He reminded me of his brief period of study under Max Aldinger. During one class, Max told them the story of how in Vienna, around 1937, he had attended a Bach recital by Szigeti in the company of his then-favorite pupil Isaac Berg. At the end of the recital, as the audience applauded, a lady standing next to them said “Very nice, but it is not Bach,” and Max recalled how he had turned to her and said, “But excuse me, Madame, did Bach himself tell you how it should be?”

“So the old guy was this Isaac Berg?”

“No. That’s simply not possible. Berg was killed during the war. Your guy must have heard that story from someone. Maybe even from Max himself. That’s certainly possible: Max had a huge circle of friends in Vienna. But your guy couldn’t have been with Max at that Szigeti concert. Simply not possible. If you ever run into him again, try to find out who he is. Berg… my goodness, I haven’t thought about that name for quite a while. Now there’s a story for you: Isaac Berg, the lost Heifetz.”